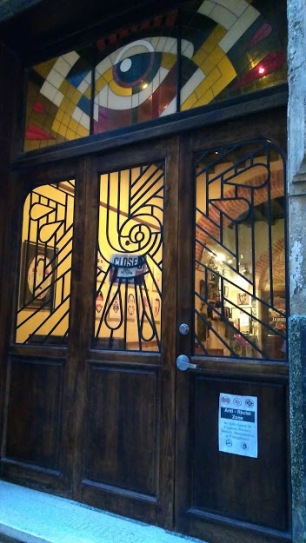 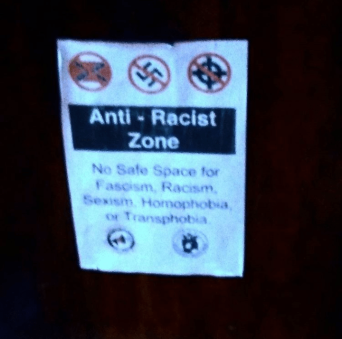 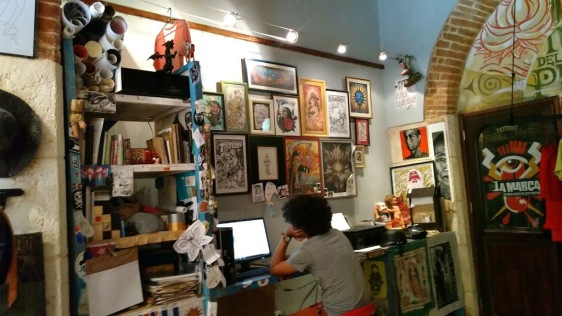 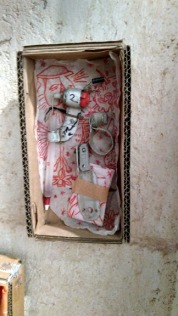 The art inside was cool and had ideas flowing freely about my mind. I wanted to build off my 2nd tattoo with this 4th one – couple the ideas of solidaridad pouring out of me during the time I spent in Cuba, learning from the beautiful people.

“On a schedule” ruins precious moments

Stay with the group

Catch up with the group

As I lay on my side getting repeatedly punctured by a needle, in less than 1hr, “Sur Arriba” was inked over SOLIDARIDAD before I went back to meet up with the Western scholars who stuck to the plan (“10 & 2 people”).

There is much to say about this ink. Here, all I’ll say is that today when I look at my tat, I think about endurance as I relive the peace I felt traveling through the archipelago the summer of 2017. Our knowledges and ways have being have lasted for thousands of years precisely because they specifically intend do right  by Pachamama, which we are all. Our rules and regulations exist to support our thriving. The last few hundred years have proved that the invaders brought with them destruction and that their ways of being harms the great majority of living sentient being.

And so we are applauded for suffering under the Western paradigms; we are expected to rise above and forgive, forget, move on from those [yt kristian euros] who continue to inflict pain on us; even as we forcibly assimilate to their hate-full non-sense dog-eat-dogma, they attack at every turn

So how about we Stop asking people to be resilient? We know this game is rigged. It is not just “bad luck” that our bodies are endangered. We do not relate to your arbitrary rules and do not intend to follow you or be like you in any way. We don’t even define achievement like you do. We pay attention to our surroundings and listen closely for the imperceptible to guide us as well. Adding to King’s words, this I believe

if we witness moments of justice somewhere,

there is promise of cultivating justice everywhere

Just when I got back from Cuba, I went on to read more and write a lot more. I wanted to spread the news, the realities I witnessed about La Llave del Caribe – to relearn and unlearn what schools taught. I did not know who to trust with support then. I first turned to a Wwoman who claims (constantly) that she’s been doing “justice work” longer than most of us “have been alive.” She helped only herself. Wish I coulda told her at her own self-congratulatory publication party: Nah bitch, we’ve been fighting yall for hundreds of years – my life doesn’t exist starting with my birth. All of my people been fighting for your people to get up the fuck out back to your homeLands!!

Then I turned to some peers who were all too busy to even just talk about experiences in Cuba.

By the time of the 1 year anniversary of the Orlando Pulse shooting, a month after the trip, I took the opportunity to submit a piece for a “community alliance” group about lessons that we could learn from Cuba about actual distribution of resources and power. Humanizing the most marginalized and disenfranchised of society, including Trans Queer non-Christian BIPOC became a national goal decades ago and la lucha sigue hoy. They, my “allies,” censored me to appease to the majority White Christian homo/transphobic Baby Boomer population that have anti-Blackness political leanings. It made no sense, but they urged me to write about my “homeLands” instead, which i visited afterwards. Without acknowledging that my homeLands are not just the borders recognized today – Cubans certainly did not treat me like I was other. We do not separate the south, islands, central and north of the Land mass according to the worldviews of the invaders – that’s preposterous!

I have never experienced and witnessed such earnest commitment to one another as I have in Cuba. The government issuing apologies to ostracized groups? The rich being taxed higher to even out wealth distribution sounds insane to some. Majority women in positions of power with real decision-making is only a dream to the Liberals here.

These are the moments of justice I hold on to and develop hope in humanity over:

1. Cuba has the highest literacy rate in the world and commits approximately 10% of its gross domestic product to education
2. 36% of Cuba´s budget is spent on healthcare
3.The world’s largest medical school, the Escuela Latinoamericana de Medicina (ELAM) has nearly 20,000 students and every single one of those students is on full scholarship
4.Cuba’s health-care system makes contraceptives widely available, and abortions are available on demand
5.Mothers and fathers can take more than a year off from work at partial pay. A new decree extends those benefits to grandparents
6.The government has reduced day-care costs for Cuban parents with multiple children, and provides tax breaks for women who work in the country’s growing private sector
7. Cuban women are about two-thirds of the country’s professional workforce about (60% of university faculty positions)
8. In 2013, Cuban law banned workplace discrimination based on sexual orientation.
9. Sex reassignment surgeries have been available under Cuba’s national healthcare, FREE of charge, since 2008

Today, I’ll put it here ^ and tomorrow somewhere else. I will never stop defending a place that fights for everyone’s dignity.

39 years ago Presidente Jaime Roldós (not a communist nor a socialist) died strangely (history tell us this is the imperialist way) in Lojas; he opposed military rule and U.S. monopolization of Ecuador’s economy.